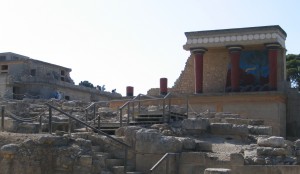 Traveling with small kids is both fun and challenge. I do my best to maximize the former and minimize the later. Sometimes, the optimization process comes with a surprise as it happened during my last flight.

It started well as we arrived at the airport 3h before the departure. We suddenly had too much time, so we decided to run the kids around the airport to let them get rid of extra energy. It was a good move 😉 Then we had a meal and still plenty of time to go through the security. Since we were not in hurry, we ended up late in the final queue to enter the plane. As a result, we had little choice in choosing good seats (yes, it was a budget airline). We took the only possibility which offered us neighboring seats, somewhere in the middle of the plane.

It first seemed to be a good choice, but it soon became less obvious. The reason was a very noisy couple in the opposite seats. Since the plane was nearly full, there was no chance to find quiet neighbors. We could only let things evolve naturally and participate in the events. As it turned out, they were interesting.

Imagine a couple, a lady and a man, say 30-35 years old, who look and behave like rebellious teenagers. Loud and colorful attention seekers. Imagine strong make-up, tattoos, earrings, headphones in the ears and them singing aloud to the music, making noises and commenting loudly on everything in the news and around, including passengers and stewardesses.

The lady clearly wanted to be in the center of the attention, talking louder than everybody around, even interfering with safety recordings. Stewardesses approached her a number of times, asking her to be quiet. Each time she managed to become silent for 20-30sec to only comment louder soon after. It was both annoying and hilarious for the other passengers.

If this was not enough, soon the lady nonchalantly took an electronic cigarette out of her bag and started smoking. OK, it was not a real fume or course, but nevertheless I was annoyed. I don’t like cigarettes and I don’t feel comfortable when I see somebody smoking in the front of my kids even if  it seems not to be a cigarette. I must admit that there was no detectable smell, but it still made me feel uneasy.  When I was about to asked the lady to stop smoking, one of the stewardesses took an action.

What followed then was a series of discussions between stewardesses and the lady. They tried to stop the lady from smoking while she was vividly defending her stand: the electronic cigarette was not a cigarette and could be smoked on airplanes. The were some loud arguments, complains and the citations of the airplane rules. She was very stubborn so the stewardesses had to use smarter and smarter strategies to make her stop. And in meantime she continued smoking, of course.

On the top of that she made  discussion of which meals and drinks she would buy. After satisfying her hunger, she decided not to smoke any more, of course commenting loudly on injustice and the policy at the airplanes.

By that time I was already fed up with the whole situation especially that keeping my children occupied at the seats was challenging enough.

Surprisingly, however, after some more minutes, the lady became quiet. She started to observe my kids and became interested in them. And in the following 15min she fully transformed herself into a new being, it seemed. She became a calm and charming lady, a lovely child carer, engaged in various plays with my son.

It was surprising, to say at least.

She was very enthusiastic, cheerful and simply fun for my son, applauding him for little progresses he was making in the plays. He simply loved interacting with her. In addition, she easily connected to the other two and was able to play with all of them on various levels.

It was a big surprise to me to see how easily she connected with the kids. She simply entertained them for the rest of the journey. There was no barrier between her and them. Everything was fun, easy, natural, as if effortless. The connection was just there.

During that time my son considered her as his best friend and had difficulty to say goodbye when we arrived at our destination. There were multiple hugs and kisses between them two. Quite amazing.

We learned she was a mother of two, having her four-day holiday away from the kids, first time in some years. She simply wanted to get crazy on her holiday, as she said.

What is the moral of this story? A simple one is this: appearances are deceptive.

Yet, there are two more important learning points.

First, what we see on the surface does not determine the quality of the inside.  Therefore, let us remember about the treasure each of us holds inside. A treasure that can be discovered, awaken or transformed when the right moment comes.

Secondly, what we perceive as a potentially negative feature, say a loud and childish behavior, has a complementary aspect which is positive, i.e. say easiness to connect with kids. Next time when we are willing to stigmatize an aspect of others, let us pause for a moment to find out what may be a hidden treasure beneath.

For sure, it is there.