Are you ready for a world without antibiotics? 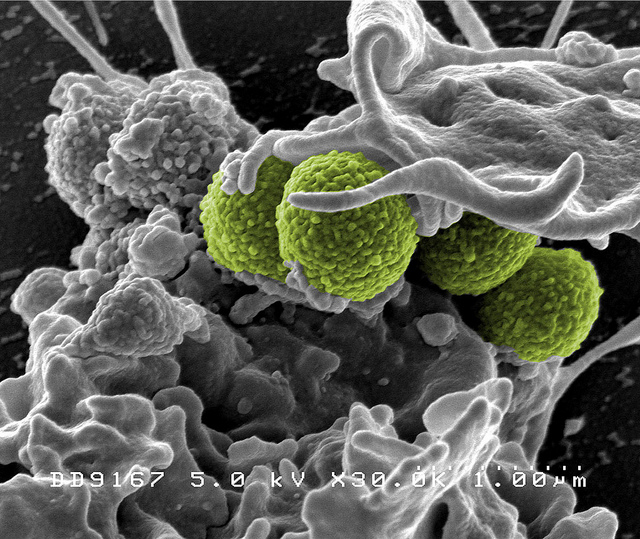 The title of this post comes from this article by Sarah Boseley, the Guardian.

“Antibiotic resistance remains a major threat to public health around the world, and for the large part, the cause is misuse of antibiotics”, says the European Centre for Disease Prevention and Control.

Say it aloud: anti-biotics. The “anti” is the Greek word meaning “against”, while “bios” is life. Against life. (Now it’s clear what the name probiotics stands for too ;))

Antibiotics are the most commonly prescribed drugs nowadays. They fight bacterial infections, though they are useless against the viral ones. When used properly, antibiotics can save lives. When overused, antibiotics boost bacteria resistance to the levels that have not been known before. This poses a threat to our lives, especially when we are going through a treatment or operation in a hospital. According to the author of this book, over 70% of the pathogenic bacteria in hospitals are at least minimally resistant to antibiotics. I think the situation is more serious than we want to believe it is.

Bacteria were before us and have been with us for millennia. Bacteria are everywhere. We wear bacteria on our skin and in various places in the body. Some of them are essential for our well-being, such as the ones taking care that the food is properly digested. Some of them are harmless. Yet, some of them are like soldiers in the times of Peace, calm yet easily mobilized for an attack when the right opportunity comes.

Bacteria may even “like us” as we have a symbiotic relation with them. They are often not dangerous until the time comes when the balance in the body is lost. This is often the case when the previous usage of antibiotics weakened the immune system and/or we have not taken sufficient care of ourselves. This happens when we sleep too little, stress and eat junk food, overwork ourselves, go through difficult transformations or crisis, or when we carry strong emotions and suppress them.

In the beginning, bacteria start slowly. There is just a feeling of some weakness, unease or perhaps extra tiredness. When ignored, bacteria multiply fast and soon they are well equipped for a full attack. You or your child are then suffering from an unstoppable dry/wet cough, catarrh and pain in the chest. After a few days you have had enough of it. You will go to the doctor (or a GP, as here in the UK). Of course, the traditional medical doctors are well trained in all main-stream approaches. They will often prescribe antibiotics.

What will you do? If this is about yourself, perhaps you will wait for some more time and see how things develop. If this is about your child, well…, you may become scared. In your best will, you will subscribe to the authority of the profession, the anointed wise men, chosen to guide towards the vibrant health. You will follow the doctor’s prescription. Of course, this is the antibiotic of the new generation, 100x better and stronger than the old penicillin.

Oh, how wonderful! How great is its working!

The missile attack of this new generation destroys everything alive inside the body, killing all the bacteria, even the beneficial ones. The antibiotic is strong. Perhaps too strong. It has worked well, it seems.

Now your good flora is wiped out from the digestive tract and you become more susceptible to invasive pathogens. This may sound acceptable to sacrifice the good bacteria for the highest good (survival) in order to kill the evil ones, but ….Do you realize that the strength of your immune system is directly correlated to the healthy gut?

And there it comes. Your intestines allow more and more toxins to go in your blood stream because they don’t have enough good bacteria to fight against. This leads to a weakened immune system and severe gut inflammation. So, soon comes an era of thrush, candida overgrown or another microorganism enjoying the clean space in your gut. Now, the doctor will prescribe another medicine which will kill all the fungi invaders. However, the war is not over. These will soon be replaced by the new, mutated bacteria which were smart enough to hide in the dark bunkers of your body.

While your body was busy to counterbalance the die-off of the fungi, the survivor bacteria were fiercely working underground, preparing for the new forms of attack. Surely, the information from the antibiotic was available so they worked hard to incorporate these traits to their DNA so that they could misguide the antibiotics of the new generation. They have adopted their DNA and cell boundaries and will soon begin a new attack. They are now wiser, stronger and better equipped.

And you or your child, their lovely hosts, will welcome them back. Why? Because your gut is unprepared for an invasion. Your cough is impossible to stop, the head is shouting from pain, the phlegm is everywhere, and you are incredibly weak.

You go to the medical doctor or a GP again and get the third antibiotic this autumn/winter. Because, obviously the previous ones have not done the job sufficiently well. And, let’s hope the winter is severe enough to kill the bad bacteria. But … there are bacteria which survive all hard conditions, even severe cold. They awake refreshed in spring, looking for new hosts.

To understand the antibiotics resistance, please read the Molecular Mechanisms of Antimicrobial Resistance report by Powell.

A few citations from Herbal antibiotics:

“Once in the presence of antibiotic, [even in low doses] a bacterium’s learning rate immediately increases by several orders of magnitude.”

“As bacteria gain resistance, they pass that knowledge on to all forms of bacteria they meet. They are not competing with each other for resources, as standard evolutionary theory predicted, but rather prominiscouosly cooperate in the sharing of the survival information.”

“The new ECDC data shows a significant rise over the last four years of combined resistance to multiple antibiotics in Klebsiella pneumoniae and E. coli, in more than one-third of the EU and European Economic Area (EEA) countries.”

“K pneumoniae is a Gram-negative bacterium, that normally lives harmlessly in the gut, but is increasingly showing up as a harmful “superbug” causing urinary, respiratory tract and bloodstream infections, particularly in hospital settings where it spreads rapidly among patients via the hands of healthcare workers and is a frequent cause of hospital outbreaks.”

A citation from the Gut and psychology syndrome book:

“Just like Candida Albicans, the Clostridia family was given a special opportunity by the era of antibiotics, because Clostridia are also resistant to them. So, every course of broad spectrum antibiotics removes good bacteria, which leaves Clostridia uncontrolled and allows it to grow. Different species of Clostridia cause severe inflammation of the digestive system, for example Clostridium Dificile causes a potentially fatal pseudo-membranous colitis. Some species of Clostridia have been linked to such debilitating digestive disorders as Crohn’s Disease and ulcerative colitis.”

Think it twice, think it 5x!

There are times when there is no discussion whether antibiotics should be taken or not. Antibiotics are to save lives. Yet, in the age of antibiotic’s overuse and hardly any new antibiotic development (financially uninteresting to the big pharma), I encourage you to think 5x before you will take an antibiotic. Perhaps your taking it for a relatively mild condition will add to the boost of bacteria resistance, while your gut flora will suffer.

Do you really, really, desperately need it to save your life???

Please realize that antibiotic-resistant infections and “super bugs” are becoming a huge challenge to standard medicine. Diseases that were easily treated by antibiotics, say tuberculosis, are not any longer. The bacteria become more and more resistant.

Before using antibiotics, I encourage you to learn about options, alternatives and side-effects. This is your homework as very few traditional medical doctors will consider alternatives for you. In many cases, they even cannot because there are regulations they have to follow.

Over the years you have consumed, ether consciously or not, sufficient doses of penicillin and related antibiotics, macrolides, antifungals and so on. This is not only through taking medicines, but perhaps, more importantly, it is through the tiny doses that come from the consumption of dairy, meat and fish, yet accumulate over the years.

I highly recommend the Herbal antibiotics book by Stephen Harrod Buhner which can be bought at Amazon or BookDepository (ships worldwide for free). Buy the version from 2012, not from 2000 if possible. This book is not yet translated to other languages.

This is a well-written and researched book on herbal alternatives (teas, tinctures or infusions) for treating drug-resistant bacteria. The book is scientific at times and not an easy read, but it is not meant to be such. The book is meant to be a practical reference for self-help or in times of crisis.

While the subject of antibiotic-resistance is alarming, the author is not spreading any fear. Instead, he focuses on facts. These facts are clearly presented and supported by available research and study (and obviously Buhner’s long-life experience as a medical herbalist); an enormous amount of references is given for a diligent reader. Buhner comes with extremely valuable information on the use of herbs. He also discusses potential side-effects or cross-references with other drugs. He presents detailed profiles of thirty herbs and their actions.

Many of the herbs described (although not all) can be grown in your garden or balcony, others can be bought in health food shops or online, either raw or as teas, tinctures and oils. The home remedy recipes are easy to follow and prepare, given that you have the ingredients first.

Are your ready for the world without antibiotics?

I am. The knowledge of Buhner has potentially saved my kids from taking the antibiotics twice over the last few months.

Photo shows “Interaction of MRSA (green bacteria) with a human white cell. The bacteria shown is strain MRSA252, a leading cause of hospital-associated infections in the United States and United Kingdom.” Photo courtesy NIAID available under the Creative Commons license on Flickr.